This is a bad thing…

Again, usually I try to avoid posting anything political on my blog, but sometimes I just can’t keep silent on important issues.

So the House just passed a healthcare bill.  But as-is, there are a lot of bad things that are going to happen as a result, and we aren’t hearing much about those.

Before I start, I’m not against reforming the healthcare industry.  It would be a wonderful thing if more people could afford proper health insurance.  I just think that the current approach is 180 degrees in the wrong direction.

First, insurance rates are going to go through the roof.  They simply have to as a result of simple economics.  The bill currently being considered requires insurance companies to continue coverage for people when they get sick, and offer coverage to those with pre-existing conditions.  Before long they’ll be require to grant insurance for everyone who asks.  The money that will have to be paid out by insurance companies is going to soar to unprecedented levels, and that money has to come from somewhere, so it is going to be passed on to those that are paying for insurance.  If you think your current health insurance is too expensive, it’s about to get a whole lot worse.  (Ideally it would be great for those people to have coverage, but with medical expenses being as high as they are, I can understand why insurance companies don’t offer coverage.)
In 2014, individuals will be required to have health insurance, or pay a fine.  This would be the first time in the history of the country that people have a required tax burden even if they have no income.  People won’t have the option to not purchase insurance without avoiding a fine, even if they don’t want it.  It’s essentially a tax for breathing; I can’t get behind that no matter what anyone says to me.  People ought to have a choice as to whether they purchase a product or not.

Also in 2014, businesses with 50 or more employees will be required to offer insurance to its employees or pay a $2,000 per employee fine for not doing so (do the math, that's $100,000).  This is where I have one of the biggest beefs with the current plan.

Most businesses are operating on extremely thin margins, if not in the red right now.  Yes, there are a few that are making great profits, but these are in the extreme minority.  If companies are required to purchase health insurance for their workers, their expenses are going to be a LOT higher (remember, insurance is already expensive, and insurance rates will have to go up to cover the new insured!), and in order to continue to operate one of three things have to happen: either they are going to have to raise prices of their products to offset their higher expenses, lay off workers in order to meet those new expenses, or lay off employees until they have less than 50. Jobs are already hard enough to come by without adding additional requirements and expenses to employers.

This is particularly devastating to companies that hire primarily minimum wage employees, like retail and fast food establishments.  If these companies are required to offer insurance to their minimum wage employees, we are going to see a huge jump in prices at retail.  A meal at Wendy’s won’t be $6, it will be $10 or more.  Prices on groceries, clothes, and other essentials will have to jump too.  But it affects the entire supply chain, not just the workers you meet across the counter.  Everything will have to be more expensive in order for employers to offer insurance.  As if businesses had excess funds now. (If they did, would we currently have 10% unemployment?)

In my job I work closely with fast food restaurant owners.  Most fall in the category of “50 or more employees” (if an owner has 2 or more locations they’ll qualify) but do not offer part-time employees insurance, yet they are barely meeting payroll and other expenses as it is.  If they are put into a situation where they’re having to offer insurance, they won’t be able to continue to operate as-is.  Either their prices will have to go way up, or they’ll have to close up shop.  Several of them have actually said to me that they’ll be forced to close down if they have to offer insurance.

But even worse than all of this is that obvious solutions to the fundamental underlying problem are being totally ignored:
I’m really bothered by the fact that the attitude of this bill and the message sent to the American public is this: You can keep up your current bad habits, and now we’re going to place the burden of that risk on everyone else.  We really ought to be encouraging people to take responsibility for themselves rather than being a burden on everyone else.   Yes, I know that many people have conditions that they cannot full take care of themselves… I really do understand that and empathize with them.  But this broad approach of removing accountability from everyone is just going to cause more problems in the end than it solves.

I do agree that something ought to be done about the current state of medicine in the U.S., but the bill currently being considered is certainly not the way to solve the problem.  It’s like putting using a band-aid on an amputated limb.  It would be far better to at least TRY to eliminate the underlying problems instead of trying to cover them up.  And considering that no government social program has ever lived up to its intended consequences, there is no way I can get behind this one, especially being as flawed as it is.
Posted by DoubleDeej at 1:38 AM 2 comments:

I Love My Computer

So I have been using the same computer for 5 years now.  I built it back in 2005 when dual core processors first became available for PCs.  So it was getting really old, and it was really getting in the way of me being efficient and effective in my work.

I decided last summer that I was going to build a new one, but I knew that one of the key parts I was looking at was very shortly due for an update, so I held off.  Then a couple months ago my company offered to pay for my new machine.  Finally, on Feb. 28th the part I was waiting for (the CPU) became available, so I ordered the parts and built it.

So, a quick rundown on what’s inside.

* Brought over from previous machine

Why 3 video cards?  I use 6 monitors, and each card drives two of them.

There are a few things that make this computer so awesome.  First, the 8 virtual cores (so it works sort of like 8 CPUs)… 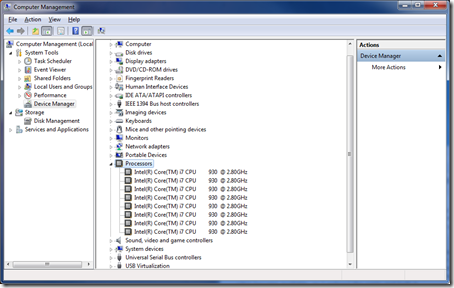 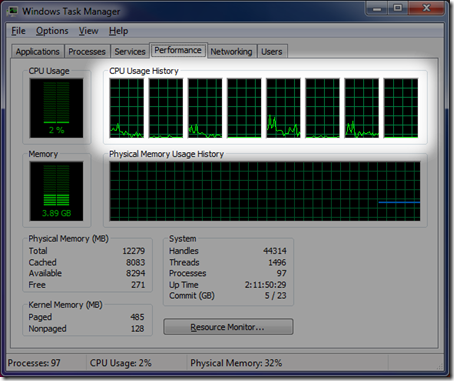 Second, would be the amount of memory (12GB):

Third would be the Intel X25-M solid state disk (like a hard drive, but it uses flash memory instead of moving parts, so it is much faster):

What all of this means is:

This computer is just a pleasure to use.  I don’t have to wait for it to do anything.

It hasn’t been without a few hiccups though…

But even with those small issues, I love this machine.

And for anyone wondering why I didn’t get a Mac, I spec’d out a “roughly equivalent” machine (they don’t have an exact equivalent) and it would have been $7,173. While some areas would be better (CPU), it would still be lacking in a few areas, like memory and video performance.  Upgrading the video to something equivalent would add several hundred $ more.  If I were to switching to OS X, re-purchasing the software I use regularly from PC to Mac would have cost an additional $10,000+, and several most of the applications I use every day just aren’t even available at all for OS X.  Economically it just doesn’t make any sense whatsoever.