One of my absolute least favorite words is “deserve.” I know, it’s not a word that people frequently think of as being negative, but to me it is, and very much so. With very few exceptions, I usually cringe when I hear people say they “deserve” something.

Let me back up a bit. I believe that everything we are given in this life is a gift, either from God or from our fellow human beings. We can’t really earn anything because we aren’t guaranteed anything. If someone gives us something it is because they want to, not because they are required to do so. When someone says that they deserve something, they are ignoring that whatever they are being given is a gift, and is something to cherish.

Imagine two scenarios… If someone believes that they deserve something and they do receive it, it often results in them not being grateful for it. They believe that they have been given something of their own merit, ignoring the fact that someone has been gracious with them. We don’t look at things as gifts, but as an exchange for something we have done.

On the other hand, if someone believes that they deserve something and they don’t receive it, it leads to resentment and hate. They feel slighted that they haven’t received something they believe they should have. This not only shows a lack of gratitude, but in fact the opposite, creating negative feelings towards another.

In either case, we lose. We’re either ungrateful, or resentful. There are no good outcomes here.

To say that we deserve something also shows a lack of humility. If I were to say that I deserve more money for my job, what I am really saying is that my needs and wants are more important than those of my employer, or its other employees. I am in effect saying that I am better than everyone else there because my needs are more important than theirs. A truly humble person is grateful for everything they are given, and they don't have expectations of anything.

Feelings of deserving create a never ending cycle. If we believe we deserve something and we continue to receive it, it either escalates to belief in deserving more, or a stronger expectation the next time, and thus stronger disappointment and resentment if we don’t get what we believe is due.

The cycle can be broken, though. Once we stop believing that we deserve something we start to become grateful for anything that we do receive. We recognize and appreciate anything done for us, or anything given to us. On the flip side of the coin, if we don’t receive something, our feelings aren’t hurt, and we don’t have resentment because we aren’t expecting it. It’s a win-win situation.

If we learn to change our attitude so that we begin to look at everything we receive as a gift our lives are happier, and we treat others better. Others can see that we are grateful and are more willing to share with us. We are also then more gracious with others as well. Everybody wins.

One of the down sides of having lots of electronic gadgets around is trying to keep up with making sure that there are good batteries in them when they are needed.  If I were to use exclusively conventional alkaline batteries I’d go broke keeping up.  So I like to use rechargeable batteries anywhere it makes sense.

There are usually two problems with rechargeable batteries, though.  First, most do not hold a charge very long, so they’ll likely be dead or dying if they have been left in a drawer for a long time before attempting to use them.  Because of this they don’t work well in devices that use very little power, like remote controls, as the batteries naturally drain themselves long before alkalines would in the same device.  Second, the predominant chemistries used for rechargeables, at 1.2 volts instead of 1.5 V, produce less power than alkalines, so many high drain devices don’t even work with conventional rechargeables.

For devices that work well with rechargeable batteries (like digital cameras) I have been using Energizer 2000-2500 mAh NiMH (Nickel Metal Hydride) batteries up until recently.  They are fairly inexpensive for rechargeables, and rapid chargers are available to provide a usable charge on a battery in as little as 15 minutes.  But I have been having problems with those batteries wearing out quickly to the point where they will no longer charge at all, so I started to switch to Duracell, but I have been having really bad problems with those not holding a charge longer than a few days, so I have given those up.  I have been anxious to find something that worked better. 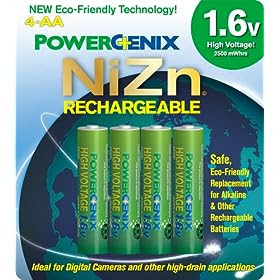 A few weeks ago I heard of a newer technology called NiZn (Nickel Zinc) that provides higher voltage and better shelf life than the more common NiCd and NiMH technologies.  NiZn batteries output 1.6 Volts instead of the more conventional 1.2 Volts provided by other rechargeable batteries.  This makes them usable in a lot of devices where others just won’t work.  I have some 2-way radios, for example, that absolutely refuse to even power on with regular rechargeables, but they work fine with NiZn batteries.  (Sparing a long technical article on why, 1.6V batteries are capable of delivering 78% more power than 1.2V batteries, and this can make a huge difference in a wide variety of devices.)  NiZn batteries also don’t drain themselves as quickly as other types, so if I don’t use them much I can go significantly longer between charges.  And for those looking for eco-friendly products, NiZn can be disposed of safely without harming the environment unlike the others.

So far I am really liking these batteries.  My camera flashes go through batteries faster than anything else I own, and these batteries are working really well there.  Conventional alkalines take around 30 seconds to fully charge my flash, NiMH models do it in about 15 seconds, and the NiZn are capable of going from fully dead to fully charged in about 10 seconds.  I don’t get quite as many shots on the NiZn as I did on the high capacity Energizer NiMH I had been using, but the difference is minimal so I’m happy to make that sacrifice.

I got mine from Amazon [with regular or fast charger], but they’re probably available elsewhere as well.  I still wouldn’t use them for remote controls (rechargeable alkalines are fine for that, but they are difficult to find) or other low drain devices, but they work wonderfully in devices that would otherwise go through batteries quickly.  I’m pretty happy so far.