Have You Seen Me? 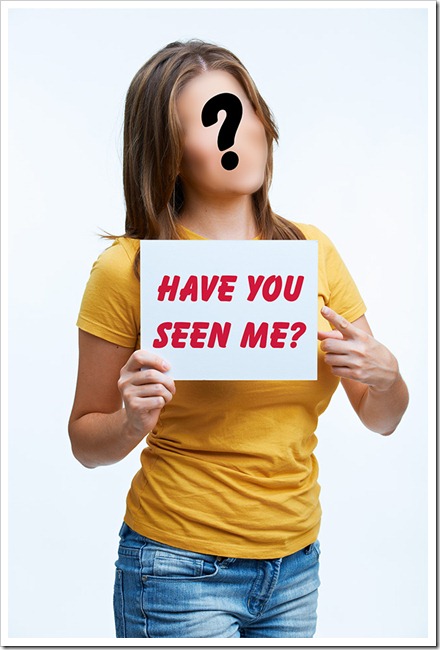 She is described as intelligent and witty, appreciative of Doug’s dry and quirky sense of humor. She is very loving of both Doug and their children, more than capable of reciprocating his devotion. She is also deeply spiritual and devoted to her faith.

She is also described as easy going and easy to talk to. Attractive, but not obsessed by her looks. She is also unusually understanding of Doug’s sometimes immature behavior, while being willing to offer correction and be helpful in encouraging his intellectual and emotional growth.

A devoted husband, when asked what he misses most about his wife, Doug responded that he misses having someone who he can talk to about anything, and having someone to spoil. She has been the light and center of his life, and he has cherished every second of her company. His life has been hollow since she disappeared.

She may be found at or near the How-To section of the local library. Like Doug, she is also passionate about learning and improving her talents. Self-improvement and encouraging their children’s education are some of the most important parts of their lives.

She is believed to be between 25 and 40 years old, and between 5'0" and 5'6".  Due to the extended duration of her absence, he is unable to recall her exact age and height.

If you have any information as to her whereabouts, please contact Doug directly.
Posted by DoubleDeej at 12:12 AM 1 comment:

To view this blog post, please verify that you are a real person.