The painters are gone; they have “done their job.”  Or so goes the theory.  I’m still not impressed, but we live with what we got.

I’ll just start with the pictures. Click to enlarge.  Pardon the mess; it’s still very much a work in progress. 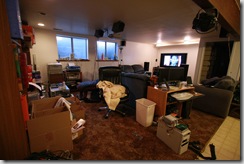 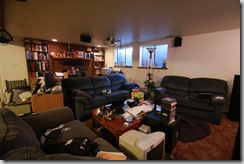 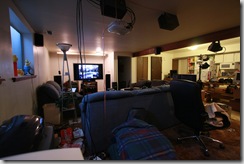 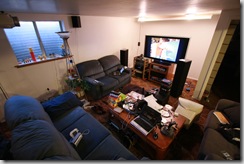 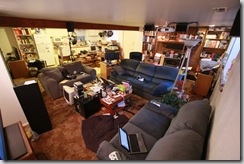 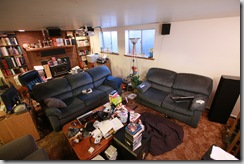 It looks a lot different, doesn’t it!  The white walls are quite a change over the hideous wallpaper.  I still would have preferred tan walls, but I wasn’t the one paying the painters, so I can’t complain too much.

Those of you that have been here will notice that there is a large piece of furniture missing.  I got rid of my desk.  One whack with a sledgehammer and it fell to the floor in two large pieces.  (It was too big to get out the door, so it had to be broken up.)  Breaking the rest of it up was really easy, and we were able to fit the whole thing in the garbage cans.  Good riddance!  Now I just need to figure out where to put everything that was in and on it (that’s what’s in the boxes).  The monitors, one professional inkjet printer, and the speaker system are all still available for the asking.

So this leaves me the opportunity to build a platform behind the couch to setup a second tier for the home theater… pseudo stadium seating!  I don’t know when I’ll get to it, but I hope it’s sooner than later.  I’d like to start doing movie nights regularly and I can only seat so many people with the existing furniture arrangement.  Keep your fingers crossed that I’ll find the time and resources to get it done quickly.

Posted by DoubleDeej at 7:40 PM

Wow! That place looks completely different. Seems like ages since I've been to visit. Probably because it has been!