I bought the software upgrade for my iPod Touch (2nd Generation) yesterday.  I know a lot of iPhone owners have been looking forward to 3.0, and I kind of was too, because it is supposed to address some of the issues I have had with the iPhone ecosystem.  Here are a few thoughts.

I can’t get the Bluetooth feature to work at all.  I was hoping to use it with a headset to make Skype calls.  But it just won’t go.

When I turn on the Bluetooth radio the iPod starts searching for devices.  But it never finishes.  It will sit on the Searching screen as long as I will allow it to: 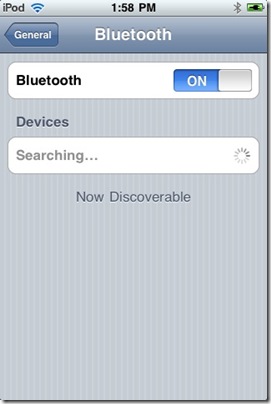 It never finishes the search, or finds anything to pair to, despite the fact that there are at least four Bluetooth devices in range.  Even worse, it fails to pair from a computer as well: I have tried pairing with multiple computers, headsets, resetting the Touch, you name it.  Basically the feature doesn’t work at all, and its alleged Bluetooth capability is totally broken.

Another advertised feature is the ability to search messages.  That doesn’t work for me either.

The idea is this: you enter text you want to search for and it will find all messages that contain that text.  Nope.  Doesn’t work.  The text I’m searching for here definitely appears in a message in my Inbox, but it fails to find it. 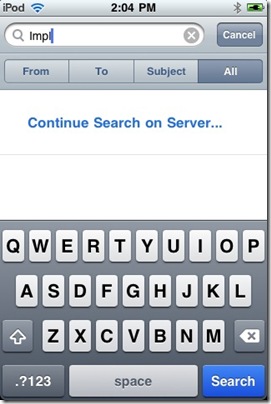 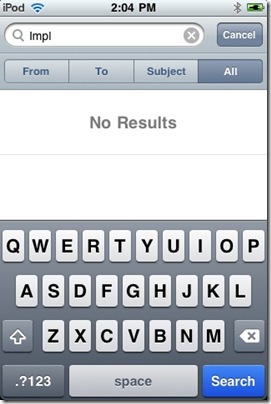 Initially I heard that searching an Exchange server for message contents wasn’t going to work, but then I heard that at least I could search messages that are already downloaded onto the device.  I can say definitively that neither one works, making the message search feature next to useless.  You can search the From, To, and Subject lines of email, but that feature really isn’t that useful.

Is it worth the upgrade?  For iPhone users, definitely, since it is a free upgrade.  For iPod Touch users, I’m not convinced it is worth it just yet.  With some of its basic functionality totally broken, I’m still holding out for future upgrades.

Posted by DoubleDeej at 2:54 PM